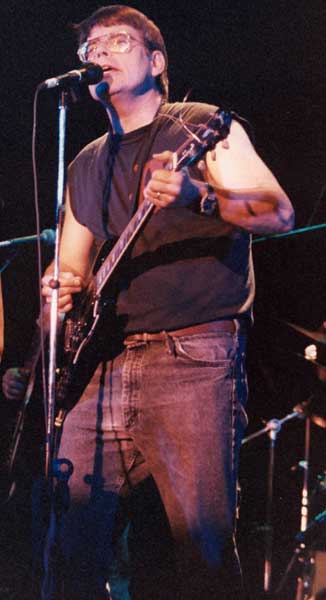 While attending the University of Maine at Orono, I met many unique individuals there who left a lasting impact on my life. There was this one young fellow in particular who started writing a regular column in the Maine Campus student newspaper in February of 1969. The title of his column was “King’s Garbage Truck”, and his byline was Stephen King.

I was a regular reader of the newspaper and thoroughly enjoyed, even looked forward to, reading King’s articles. Not personally knowing him, I thought the tone, style, use of humor (satire, specifically) and subjects discussed were written by an older man, perhaps someone the age, and maturity, of an Art Buchwald (1925–2007). Someone who was at least forty–five.

You can’t make up anything anymore. The world itself is a satire. All you’re doing is recording it.

I became politically active on campus and participated in many campus activities at that time. I often went into the Maine Campus office. It seemed every time I visited the place there was a guy who sat behind the counter and who had his body permanently hunched over a large manual typewriter. He never said much, if anything, that I recall. He just typed away with a singular focus on what he was doing. He looked to be about my age, which was all of twenty–one years. 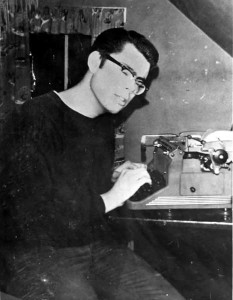 Finally, consumed with an overwhelming curiosity in my having to learn who this person was, in discovering the reason why he was so intent upon this task, and finding out exactly what was he writing about, I asked him, “What are you typing away at?”

There was no immediate response from him. He continued striking the keys. They hit the paper secured in place in the roll bar. The shift bar was hit several times. The keys and space bar struck with authority and rapidity. Reaching the end of a line, the line space lever was quickly touched and he started anew on a fresh line for the type to ink its way onto the page.

He stopped typing, reached over to a large pile of pages next to him and set them into place by tapping the bottom of the manuscript onto the table. It made a fairly substantial thunk when it connected with the table top. He stood up and carried the manuscript over to me. Athletic looking, tall, wearing thick eyeglasses; he was dressed fairly shabbily (as most of us were wont to be then). Yet, his clothing truly was nondescript.

The manuscript was handed over to me without a word.

While he went back over to his position and played an odd sounding cantata on the typewriter, I took a closer look at the manuscript itself. It was typed on what we called back then arithmetic paper. It was a light brown in color and had what appeared to be spots or threads of fiber embedded in the surface.

The office was quite busy; lots of people arriving, leaving or staying and having conversations with the newspaper staff. All of that activity quickly fell into the background of my awareness. The more I read what was written on those pages, the deeper I went into the substance and the context of the story written on them.

I was struck at the sophistication of all the literary elements he had summoned together to tell a story about a car. Character description, setting, plot, diction used by his characters in their conversations with one another, his sense of humor, knowledge of cars, awareness of American popular culture . . . were all set into extraordinary motion. I knew as I was reading it that this young man was the most extraordinary writer I had ever met in person.

I was bowled over by the fact that he was so young, but he wrote like an old soul was in possession of him.

As I continued to read his work, I saw him watching me on occasion. While looking over at me, he never missed the stroke of a key. Eventually, I was only aware of where he had sent me in time within the constructs of the story he was telling. I read through all of the pages.

Finishing the last page, I placed it onto the rest of the manuscript pile. I tapped it against the counter the way he had done so earlier before handing it over to me.

“This is very fine writing,” I said to him.

He nodded his head at me and simultaneously stopped typing.

“Every day,” he responded.

He came over to me and took his pages back in his hands. “I try to make sure I write two thousand words a day, rain or shine.”

“For what reason?” I asked.

“If you write two thousand words every day, look what you end up having at the end of a week, a month . . . ”

I was truly puzzled. No one in my life ever accomplished such a huge task, let alone with such grace and artistry. This writing had an edge to it, a modern grittiness I had not seen before. All similar literature I had read was classical fiction: Walpole, Poe, Coleridge, Crane, Stevenson, Stoker, Mary Shelley, Lovecraft.

Even then at that time in my life, I wanted to write, maybe not like what I just read, but perhaps approaching it for starters. I could not get over what I had just encountered. It was very similar to hearing a musical performance done by a great artist.

The power of the written word was expressed in a flow of sentences that seemed to capture the spirit of the times we were living in, but had echoes of the past reverberating in an odd syncopation in the background of the story. It wasn’t just prose; it was Dylan on the typewriter. Chuck Berry twisting and turning with a malicious grin against the grain of the story itself. Hendrix messing with the “Star Spangled Banner” and lighting its melody on fire with his own remarkable sexuality and genius. 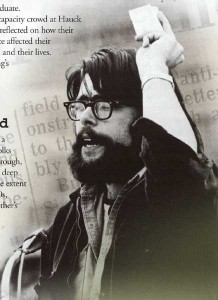 When I learned that I was talking with Stephen King, all the dominoes I had collected in their diverse array and scattered piles of memory about him fell into place, and I was even more awed at what he had done and accomplished at that time.

We crossed paths frequently at Orono. Later on in life, in the 70s through the 90s, I would see him briefly from afar. His wife, Tabby, and I respectively read our poetry at at a combined poets’ reading at the College of the Atlantic. My children would serve him food at some of the places where they worked in Lovell, Maine. I was in the foundry of Terri Steele when he designed and built the gates and fence now installed around Steve’s Bangor home.

I never forgot what he told me. I remain astonished and humbled by the output and quality of his writing. His is a singular perception of its artistry and craft, not fit for those critics who esteem more sophistication in their diet for literary expression and consumption. Consumption here is a double–edged sword, standing not only for what one ingests, but for the tuberculosis that consumes one’s sense of art. 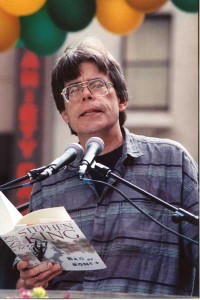 In May of 2014, I accessed Steve’s web site. Once again, I heard him say that he writes every day and aims for two thousand words. I think I read somewhere that he writes from nine in the morning until noon all but four days a year.

Do you think, I asked myself, that I can finally do the same—write every day? It’s only been 45 years that have passed since he first gave me such a powerful glimpse into the way of writing.

I resolved to write every day. 2,000 words were just too herculean. I adjusted it to 500. Otherwise, writer’s block would tangle me up in a twisted ball of failure just thinking about how I would ever achieve such a word count on a daily basis, let alone do it.

A resolution fell into place in a way I had never before experienced.

It took a master storyteller to help me reach that point.

An interesting story on a young college student named Stephen King. It is easy to see that King was giving out seeds of wisdom and inspiration for any listener interested in writing.

He seemed very focused on his path of writing and he was convinced even then that being a successful author was his future. Little did most folks know that, indeed, he would not only do so, but be an American icon in his particular blend of literature.