A Strawberry Moon and a Medieval World . . .

At the beginning of this year, I made a wish list in scheduling a launch date for the Penitent – Part One. I gave an approximate time of April/May as the target date in doing so.

For a variety of reasons, enough attention and resources could not be marshalled together successfully to make that general time frame happen. As May quickly passed by, I made another date of June/July, with the understanding that I hoped I could make the story available to people no later than July 4th.

With July almost upon us, I have had to change the date once again, now to the third or fourth week in July.

[I’m eyeing August 18th (my birthday) as a backup plan; however, I prefer not to have to wait to August.]

The time has passed by quickly, and it has been accompanied by some incredible astronomical events. 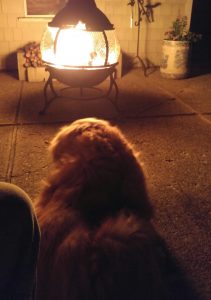 One of them is pictured in the lead photo to this blog.  The moon that is in the photos pictured here in this posting is called a Full Strawberry Moon, which is also the name for the full June moon. It is also called the Mead Moon.

I checked online about this name with The Old Farmers’ Almanac. In explaining the etymology of the moon being called strawberry, the article stated that the Algonquin tribes knew this moon to be “a signal to gather ripening fruit.”

Yes, it has another name, too, the Honey Moon.

No, this name doesn’t make  any allusion to those celebrating the matrimonial bliss of newlyweds, but refers to the phenomena of the moon staying close to the June horizon. In doing so, it can appear larger than normal, and turn amber in color as well.

In Europe, it is known commonly as the Full Rose Moon—the Lotus Moon in China.

The rarity of this June 20th, 2016 moon is that it occurred on summer solstice night. The last one occurred in 1948, the year I was born.

I’m not sure I’ll be around then to see the next one. It’s always been a once in a lifetime event.

The night of the Strawberry Moon, which was also Father’s Day eve, I was out on my patio where I had set a fire in the chimenea. It was a rare time of relaxation. I lit the fire at dusk. As the night settled in around me, the only illumination present was from the logs burning in the chimenea and from the light of the full moon. 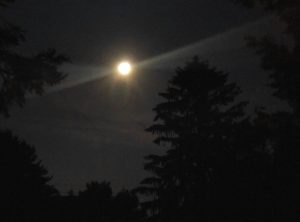 Framed by the trees in the yard, the strawberry moon brightly shines in the sky above me. (Photo by A. Keith Carreiro, June 2016.)

I walked around the backyard to better observe the Strawberry Moon that was in the southeastern sky.

If you have been following my blog, you know that a large part of the back yard is landscaped and contains a Japanese style garden. You have to be careful walking around there at night as you could easily trip and fall on the natural stone walkways.

While writing such night time scenes, I was worried that light given off by the moon could provide sufficient illumination to what was happening around the central action in the story. To my relief, I discovered that I could easily walk around the yard and see where I was trying to go.

Pall, one of the protagonists in the story, faces severe conflict and danger from natural and unnatural enemies. In Chapter Six, it is nighttime. Pall has hopefully escaped from the depredations of a fiendish creature called Ünger. He and another man are in flight away from it:

They had reached the end of the field. They stopped momentarily to assess the gloom of the forest proper.

“Only hours ago,” Pall said, “I thought these woods were under the blessings of a caring guardian. I don’t get that feeling so much now.”

“Savage wanted us to go inside the edge of the tree line and follow it back out through the farm toward the track you came in on,” the young man said.

Twin maintained his silence. He appeared to be listening to something Pall did not apprehend.

“I thought I heard something.”

“Yes,” came the reply. I heard something else earlier, too. As we were approaching where we’re now standing.”

Pall listened with all of his senses tuned to detecting any ill–starred sound. Hearing nothing, he urged Twin to follow Savage’s directions.

“Right now,” Twin said, “I am afraid to move. Suppose it’s that demon thing. We should get farther into the woods and put our thoughts aside.”

“I can’t do that, Twin. We’ll never get out of here if we start doing that over every sound we think we’ve heard.”

“Very well. Very well. All right—let’s just get going along here,” he pointed deeper into the forest.” 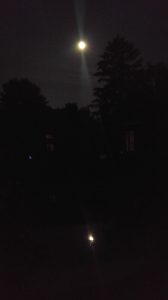 The same perspective as taken in the lead photo, except the electric lights are off in the main house. (Photo by A. Keith Carreiro, June 2016.)

Without further ado about their fears of being brought once again into battle with Ünger, they plunged a greater distance into the trees. They could see the field they had just traversed lit up under the moon’s splendor. Everything in the distance under its touch appeared as if made by the hand of a protean silversmith. It had a strength to it that was unworldly. The common appearance of nature had a sublime, even cherished, polish to it. Had both men the time, they would have stood in wonder at the sight of the spectacle before their eyes.

The clamor from the killing spree Ünger had unleashed throughout the farmstead had all but ceased. Occasionally, they heard a muted cry. This sound of mortal strife soon ended. All that could be heard was the water dripping down upon and around them in the wood.

They could see through the trees that another field intersected with the one they were following. Brightness illuminated farmland on their left and ahead of them. They slowly approached the edge of this new opening.

Reaching the verge of the expanse before them, Twin whispered, “It would be foolish to go across the middle.”

Pall nodded in agreement to this assertion.

The moon I saw in this narrative provided an eldritch, yet radiant and vivid light to everything around Pall. The forest, the farmland and the action occurring in and around the farmstead where he had been earlier were soaked, drenched, in this light. It is in this light, as well as in the competing darkness, that the tension in the story is tightened even more gradually as the story continues to unfold.

Time in this story, as I find in our own world, is very present with us. Its course and our lives are inextricably woven together. Pall’s world, while illusory and medieval in nature and human experience, rivals our own, which often enough has the same seeming qualities.

Time in the Penitent, though, is not at all what the people in Pall’s world think it is.

I hope that readers will become engaged in the way time passes in this story and how it is linked with mankind’s desire to escape its bounds by becoming immortal.  If I’ve done my job well, that desired outcome has a good chance of happening.

I hope to get the first novella available to prospective readers in July.

I don’t want to wait another month, or another Full Thunder, or Full Hay, Moon, to do so . . .

Tags: The Swiftness of Time, Time, writing
Previous post The Storytellers (Part XIV) – An Interview with Author James Hankins . . . Next post Pre–order the Penitent – Part I on Amazon . . .

Thank you for the interesting background material on the rare Strawberry Moon occurrence.

You will know when it is the right date and time to officially release your book, which we are all looking forward to reading in full.

Thank you, Robert, for your kind words. I’m very much looking forward to getting everything ready to do so!