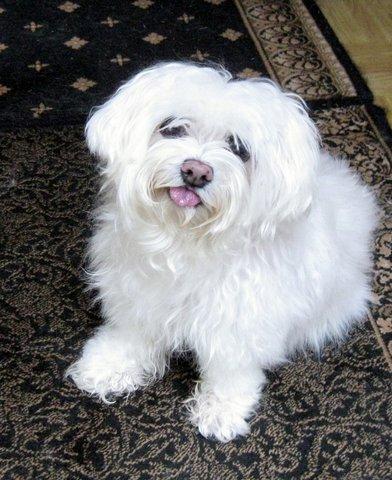 It is not easy to put a beloved dog down. It is not a good day when such an act, no matter how merciful it is to our four–footed companions and family members, has to be made.

Little did I know last week when I started this blog that I would be following the first post so quickly with a blog dealing with endings. Today, I debated with myself whether or not to post a reflection that might seem too personal. After all, the purpose of this weblog site is to talk about writing, self–publishing and issues relating to the story line being created for the series the Immortality Wars.

To many, talking about a dog’s passing seems irrelevant, perhaps even superficial.

Yet, kindly let me take the time to share with you here the context of Lola’s story in my life. When I reach the end of this entry, I hope you may be satisfied about the absolute relevance this little white, ten–pound Maltese has on the Penitent. If I have touched you in some way in this regard, that is indeed a blessed notion. If you wish, send a comment to me. I will respond. I think Lola would like that . . .

In 2002, when we had moved back to New England from western Pennsylvania, my wife, Carolyn, said that she wanted to have a little dog. Quietly and on the q.t., I did some research on finding one for her.

Of all the little dogs I read about, it looked like a Maltese puppy would be a perfect present for my wife to receive. I found a breeder in Wayland, Massachusetts. Her name was Kim Lemaire, owner of the former Laptop Maltese company.

I visited Kim’s home twice, once by myself and the other time with my son Shane. I gave a call to my other son Eli. Between the three of us, we decided that together we would purchase a puppy and give it to Carolyn as a surprise gift for the Christmas of 2003.

The first two times I visited the breeder, I discovered with great delight that the puppies were beautiful, high–spirited and playful.

Perfect, I thought, for Carolyn.

I wanted to buy one on the spot. Yet, a problem arose from that line of thinking: I was the one getting the dog. It needed to be Carolyn doing so, not me. The surprise factor was diminishing.

Perhaps I can get Carolyn to go for a ride and simply take her to see the puppies?

When asked, Carolyn refused to go out just for a ride. I explained that I wanted to take her to see some Maltese dogs. She reluctantly went to see them with me. The surprise factor had now completely evaporated.

When we got there, we soon were ensconced in the middle of a riot of puppies, several litters in fact. None were interested in her; and though Carolyn thought each little one was adorable, she did not seem overly enthused about any of them.

“Do you have any others for sale that we could see?” I asked Kim.

She went to another part of the house and came back with an older, white female pup in her arms. “She’s four–months–old,” Kim informed us. “I am planning on breeding her. She’s not for sale.”

However, Kim stepped into the circle of dogs where we were seated and placed the little dog at its inside edge. “Her name is Lola,” she said, as she set the dog down on all fours onto the hardwood floor.

Lola looked around, taking her time to do so. She saw Carolyn and made a puppy–line directly toward her. Instantaneous and permanent bonding happened.  Filial imprinting of the finest kind occurred the moment Lola jumped onto Carolyn’s lap. At that point, I knew my wife was not leaving without that puppy.  To my absolute delight, an unexpected surprise did occur anyways, and it ended up transforming everything.

We brought her home with us that day. The two of them became inseparable.

Always, when given the opportunity, Lola was at my wife’s side. We often called her Carolyn’s “shadow”. But I think, now, she was more her light and shining star. We just did not understand that during the time she was given to be with us.

Lola gave us two beautiful litters. Carolyn delivered them. The second one only had a male and a female. They went to wonderful owners, the male going to our daughter Chelsea and her husband Michael. The female went to Chelsea and Michael’s good friends in San Francisco.

In her first litter, Lola gave birth to three females. When these puppies came into the world, the first made a murmuring sound we could barely hear. The second uttered a small cry of discovery. The third came out stillborn.

My wife cleared away the sickly yellow–looking sac in which the last newborn was in, as well as the other stickily clinging birth material that was present, especially around its mouth and nose. She cleaned the pup well and with the utmost loving care. Our daughter Sage, who was assisting in the birthing procedure, thought the puppy was irrevocably gone.

“No,” Carolyn replied with great and surprising assurance, “this dog will live.” She put now what what looked like a three–inch baby Robin in her hands and then rocked it back and forth between her legs and up into the air before her.

We thought my wife had lost it. We cautioned her to stop. She continued the rocking motion a bit more. When she halted this movement, we heard a tiny gasping sound. With great astonishment and surprise on our part, we saw that the puppy was alive.

Their names came to me in a flash of sudden insight. The first two were absolutely beautiful Maltese puppies. Whisper went to Chelsea, who renamed the puppy Issa. Whimper went to wonderful parents in Bedford, Massachusetts: she was renamed Lola, in honor of her mother.

We kept the sickly one. The vet, at first, didn’t think the puppy would live. However, if you look at the photo of me under the author section on this website, you will see that I am holding a Maltese dog—which is Wheezer, the one who came back to life from death’s doors that day.

When I publish the second part of the Penitent, if fate and my prospective readers are kind to me, you will see that these three puppies’ names represent three, what come to be, powerful beings in this part of the story.

And what about Lola? Time gave her to my wife and me for 12 and a quarter years. Lola was a boon companion to us, but particularly to her Carolyn.

After all, our Lola was a magical creature, and she was one of our best and finest friends.

This diminutive ally showered us with many gifts. She gave us such immense pleasure. Laughter, joy, comfort and even hope. Such as these, after all, do not weigh very much, especially when put on a tangible and physical scale of worth. Yet, when placed against the daily grind of exhaustion and great estrangement found in this world, I think Lola was equal, in size anyways, to at least one of God’s largest and most favored angels. The world brings us its own fear aplenty, she simply brought us her own unquenchable cheer.

Often, we sang to her; calling her silly pet names. When my wife and I played our guitars together with one another, Lola loved to curl up at our feet, listen attentively for a bit, and then fall asleep with great contentment.

Even though she was just a dog, we loved her so very much; and, she gave us the wealth of unconditional love: we just wanted her to live forever . . .

Keith: I am sorry to hear of your lost even if your buddy was not technically “a human being”. It is not superficial to ponder. You were very kind to me when unexpectedly my active dog woke up cripple one morning. It is amazing in the evolution of dogs, cats and other such pets that it is easy to see these animals have their own personalities and what we would call “feelings”.
In reading your story, I was reminded of what a dog expert told me which sounds so Zen; “the dog chooses their owner” and that seems to be true in this case.
I think the way to quickly move forward is to remember that you and Carolyn gave Lola a great home and a happy life.

Dear Mr. Carreiro,
Thank you for sharing sure a beautiful piece about lovely Lola. As I can see, she was beautiful girl. Today you took the time to reach out to me to share your story and how my staff helped you through a difficult time, when it came time. Your love is palatable for your wife and Lola. Your words were touching and real and I’m sure her light is still shining bright, like a shining star. I wish you and your wife well and my thoughts and prayers are with you both. Fondly, Jill Ramsden RN, CVPM, Practice Manager Acoaxet Veterinary Clinic

Thank you, Jill, for your kind words. I am glad that you liked the tribute to Lola. It was good to talk with you the other day. Please thank your staff once more for their professional courtesy, kindness and expertise in helping Carolyn and me through a very difficult time. It is not easy to lose such a beautiful spirit as Lola.

What a beautiful story dad, very well done. I’m so glad she was a part of your lives