A Journey over One Year’s Time in Self-Publishing . . .

Last December of 2015, I made two New Year’s resolutions. The first was to join the newly opened YMCA in Swansea.  I’ll return to this first point later on in this blog post. The second one follows:

It has been one year since I started The Immortality Wars website.  Little did I know when I began this journey what I had gotten myself into: all I wanted to do was to get the story I had written in 2014 out to folks. Never having done anything similar in the past, except for newspaper and academic writing, and the occasionally crafted poem, I did know that I was embarking upon a steep learning curve.

I had to figure out all of the following listed items to accomplish my becoming a first–time author of fiction:

(2)    Design this platform from scratch;

(3)    Select the supporting technology to host it on the web;

(4)    Select the most appropriate internet service for the website;

(8)    Learn how to use the website’s dashboard (a massive task which I am still attempting to learn);

(10)  Learn how to operate these different platforms and create pages that aesthetically reflect design on the author’s website;

(11)  Getting the Penitent ready for publication;

(13)  Learning how to get the manuscript ready for the different versions offered;

(15)  Where do I get the money to finance this project? 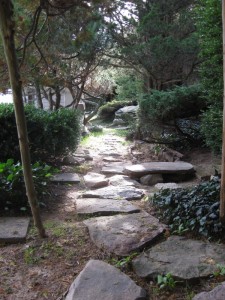 So many steps to make a path toward where one wants to go (A. Keith Carreiro, 2014).

(18)  Attempting to find and hire the best people to help me;

(23)  Being able to conduct and to absorb all of this information while working;

(24)  Learning about the different ways of self–publishing;

(25)  Learning the different steps an author must embark upon to self–publish successfully;

(26)  Finding reliable, trustworthy, and affordable experts to help in this process;

(27) Networking with the literary community;

One of the first artist’s designs for the cover of book one rendered by Carolyn Carreiro. (Photo by A. Keith Carreiro, January 2015.)

(38)  Failing at any of these items and/or dealing with people who are unprofessional;

(39)  Finding and hiring a publisher;

(42)  Finding a mentor or book shepherd;

(43)  Finding and hiring a professional who can design and lay out the manuscript’s interior pages;

(44)  Finding and hiring a graphic designer to do the outside aspects of the book (front and back covers and spine);

(46)  Create press materials for it as well;

(48)  If possible, connect with local writers and learn from them;

(52)  Getting the book ready to sell on the variety of sites on the Internet;

(53)  Consider & Select if I want to use Amazon’s Kindle Select option;

(54)  Promote the book by doing blog tours, personal readings at libraries and bookstores;

(58)  Set up a PayPal account in order to send and receive money;

(60)  Finding a consultant to help oversee and advise me.

The numbered outline listed above is not a complete one, but it highlights the tasks and areas I needed to complete, at the very least, to get the first part of the Penitent published.

From December 31, 2015 to June 24, 2016, I wrote a mid–weekly blog.  I wrote a total of 26 blogs.  It was, at times, delightful, daunting, dreadful, dreary and deceptively difficult to do.  Overall, I enjoyed creating this body of weekly narratives about the series, about what inspired me and about storytelling in general, especially those storytellers who had made a personal impact upon me. For purposes of keeping a family archive, it was humbling to do. Many of those individuals who influenced me are no longer living. I felt it was the least I could do to give them a place where their voices and sense of life could be heard, although all too briefly, once again.

However, I cannot mention enough how much effort this overall endeavor of self–publishing took from me. Equally so, was the amount of dedication and commitment it took in getting the book published.

After reading and talking with others extensively about publishing the story, I decided to split the first novel into three parts, with each one having a total of about 56,000 words. I would not be able to pay for a book having over 168,000 words.  Thus,

the Penitent – Part I,

the Penitent – Part II, and

I had an original target date for launching the first novel in April of 2016. Unfortunately, due to a variety of factors, this date was not met. It was reset seven times.  By the time I posted my June 24, 2016 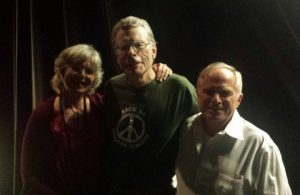 blog, I was completely discouraged and fairly burned out on the whole process. For the amount of work I was pouring into this project, I had literally nothing to show except for everything being postponed, defective, incorrectly done, or discussions bogged down in excruciatingly minor and trivial details. Or, people were agonizingly slow in responding, and when they did respond, the response

was partial and the facts contained therein were also wrong.

I ended up editing an already thoroughly edited manuscript another seven times because of a breakdown in communication with those involved.

By the end of June, I almost quit. I did stop blogging. I stopped writing on the second book the Pilgrim.  This was not good. I had the summer to write this story, but everything seemed to get in the way of my being able to get the manuscript written. I also could not reconcile where I was going with the story.

Thankfully, the February 25, 2016 blog I wrote about Stephen King helped put me in contact with David Bright.

David suggested to me that I contact Jim Bishop and see if Jim would be interested in having me write a chapter for the planned Hearts in Suspension book who’s Idea Jim had successfully shared with Steve.  Please refer to my November 12, 2016 blog for more information about this adventure, which it truly was, in writing.

That was a remarkable experience.  Yet, despite that incredible writing project, I was very disappointed in the lackluster progress (actually little to none) being made on the Penitent.  I even quit going to the YMCA for exercise. Instead, I stayed home and worked outdoors practically every day until my college and university classes began in the late summer.

What happened to me?

I had depended upon people who could not deliver the services that they promised. Plus, I allowed my own fears of failure and lack of self–confidence to mushroom into a stunningly concrete form. An aversion to being a businessman also took control and I basically shut down.

Fortunately, after the second or third week of the 2016 fall semester, I kicked myself in gear. I started working out again at the Y, and I went to the Teaching & Technology Center at Bridgewater State University and had the folks there help me figure out how to edit the PDF file of the manuscript for the POD.  I learned how to 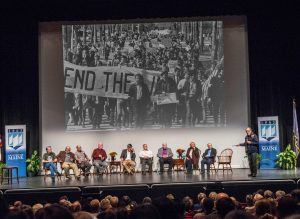 9 of the 12 co-authors with Stephen King at the launch of HEARTS IN SUSPENSION. (Credit: permission & Courtesy of Adam Kuykendall, 7 November 2016.)

make the revisions and learned how to use the Lulu dashboard where the project was being stored for the paperback version.

I am still hoping to do the audiobook, but I am holding off on that for now.

In September, I once again began working out on a regular basis at the Y. At this year’s end, I have gone from a weight of 208 to 172 pounds, a loss of 36 pounds.  Overall for the year, I shed 3 pounds a month. At the last visit to my doctor’s office, I had a blood pressure reading of 112 over 87. A year ago, it was 142 over 75. Needless to say, but I’m going to say it anyway, I feel unbelievably better!

Looking ahead: I hope to continue promoting and selling the Penitent – Part I. I have started editing Part II this week for the eBook version. I hope to launch it on April 1, 2017. As I now have experience in getting the first novel published, I hope that it will be far smoother sailing for launching the next novel.  The basic cover design for the eBook is already completed. I just need the designer, Hollis Machala, to work her magic on getting the text configured over the image she has so wonderfully drawn for it.

Wonder of wonders, I am excited about writing again and getting the second book in the series out there so it can join its earlier counterpart. 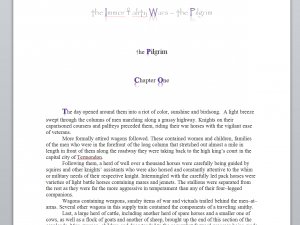 Screenshot of the beginning of Chapter One, THE PILGRIM (A. Keith Carreiro, 2016).

The release for the third part of the Penitent is being planned for August of 2017.  I have made an internal pledge to write the second book, the Pilgrim, during this coming summer. Thus, if I can get it completed, I can launch the fourth book in December of 2017.

In the meantime, I have been swept over by another writing project idea that I just have to write, even though it is in a totally different genre of literature.  It is a crime novel.  I know the characters, the setting, the time of year, the weather, the plot and even the title of the book. I am beginning research on it next week at the Brown University Library in Providence.

It has been a very amazing year for me.  I hope that I learn even more about the craft of writing and the literary trade over the next year.  I hope also that the stories I am writing will help lead me to a new career, and that I will be in even better physical shape next December . . .

I wish for you and yours the best of great health, happiness, success and love in 2017!

¹“In this animation, the vertical direction indicates time and the horizontal direction indicates distance, the dashed line is the spacetime trajectory (“world line”) of an accelerating observer. The small dots are arbitrary events in spacetime that are stationary relative to each other. The events passing the two diagonal lines in the lower half of the picture (the past light cone of the observer) are those that are visible to the observer.

“The slope of the world line (deviation from being vertical) gives the relative velocity to the observer. Note how the view of spacetime changes when the observer accelerates. In particular, absolute time is a concept not applicable in Lorentzian spacetime: events move up-and-down in the figure depending on the acceleration of the observer.” 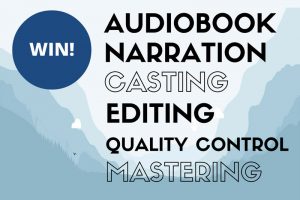 Reedsy was founded in London in 2014 by Emmanuel Nataf, Matt Cobb, Ricardo Fayet and Vincent Durand. They have put together a marketplace of professional editors, designers and marketers who can assist authors and publishers through every stage of the publishing process. Along with ListenUp Audiobooks, they are currently running a prize contest giveaway that offers the winner up to a total of $4,000.00 in costs for an audiobook production.

To enter the giveaway contest, please click on the link below:

Quite a journey!! I am looking forward to part ll of the Penitent!

Yes, indeed! Thank you for your amazing support of this story, Carolyn!