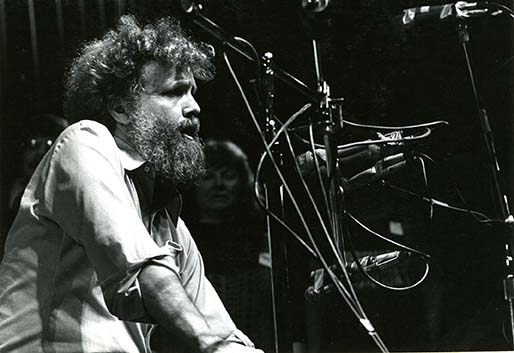 Edward D. “Sandy” Ives, Director of the Northeast Archives of Folklore and Oral History [NAFOH], taken on stage at the Folksongs in February Festival held in Hauck Auditorium at the University of Maine at Orono on Feb. 11th and 12th, 1977. Photo taken at the end of the Saturday night performance of February 12th.  Gordon Bok and Margaret MacArthur are in the background. (Photo courtesy of the Maine Folklife Center, UMO.)

Dr. Edward Dawson Ives (1925–2009) was one of the University of Maine’s most celebrated professors. His passion for northeast oral history was infectious, informative and eye–opening. His focus of study, his research and scholarly agenda, was on the oral traditions of Maine and the Maritime Provinces of Canada. As a folklorist, he was fascinated with the way songs, stories and histories sprang forth from their local makers and creators.

Enthralled with this experience, his journeys throughout the Eastern Canada and Maine’s woods and waterways to record local mythmakers and their song cycles became the stuff of legend themselves. These findings were selflessly shared with everyone around him. It was as though he was a humble Midas, and the realm of his kingdom was not found in the glitter of gold coin, but in the shining light of his vast understanding of human nature.

I’m not pronouncing him a saint. He just had a delightful sense, multiple twists even, of irony, satire and bombast that just about tickled every contradictory part of you. The cynic, the skeptic, the believer and the dispossessed were all touched by his insights into our fallacies and delusions as well as into our strengths and dreams.

Once exposed to his brand of conversation, people were permanently hooked to his storytelling hip. I was one of those who fell under his spell. The warmth and kindness of the friendship and mentoring he, and his wife Bobby, so selflessly shared with me while I was at UMO remain priceless to me. At that time, Bobby was head of student programming, particularly for Student Activities at the Memorial Union. I think she had an office up on the third floor of the Memorial Union.

I knew Dr. Ives, along with everyone else, as Sandy. Even though I never enrolled in any of his anthropology classes and studied with him formally, I felt as though he taught me a profound amount of knowledge, not just about all things storytelling, but more about the importance of being kind, and by being passionate in using one’s total sense of awareness in the moment of being with people. His sense of creating a forum of discussion between “you” and “I”, particularly in transforming it to “we together”, was exquisite. I wish I could ask him now about his understanding on the writings of Martin Buber because Sandy seemed to have epitomized them.

I encourage you to read the related links I have put together at the end of this post in order to learn more about this unforgettable individual. During the 44 years that he taught at UMO, Sandy garnered many honors about his work. I just want to say a bit here about what I remember and cherish the most from being in his company.

My memory, faulty at best now, is that Sandy then lived just off the State Road, Route 2, in Veazie, Maine. Whenever I could do so, I would visit with him there. He lived on the second floor of an old Maine farmhouse. I would walk upstairs to be greeted by him and we would go into the back of the house where there was a very simply furnished and comfortably situated living room. In those days, he would describe his publish or perish peregrinations. It was the first time I became acquainted with the challenge professors had to face in order to maintain their university and college positions.Teaching was not their main focus, research was, instead, with service to the community added to their expected burden of academic tasks. The work he did  on the lives of Larry Gorman (1964), Lawrence Doyle (1971) and Joe Scott (1978) enlivened and peppered part of his conversations.

One of my most favorite times in being with him, Sandy would play his guitar, only under the condition I would reciprocate by playing mine.

He had a haunting yet soothing tenor voice. While enthralled with his folk singing, I was equally astonished at how he could put you so much at ease in his presence. He could do this in the company of one, or in the congregation of a hundred. He had this effortlessness to him. In many ways he reminded me of my Uncle Bob in the infectious delight he could summon within himself as well as in those around him. There was no sense of an inflated ego or false pride about him.

Soon enough, if the day was even passable to do so, we would head outside along with the Ives’ golden retrievers and walk across the farmland to the Penobscot River. I would be regaled by stories of the their children and family, and the history of the area. They pointed out to me some of their favorite trees, the places they loved the most on the farm and how they changed throughout the seasons of their lives there on this land.

When we reached the river, they also taught me about some of the culture of the Penobscot (Panawahpskek) people and helped me to see the area in a deeper historical context. I learned about the river’s former purity and how the ecology and wildlife were being so adversely affected not only by the dams placed on it, but also the havoc pollution had wreaked on the sea–run fish present in its waters, such as the Atlantic salmon, shortnose sturgeon, alewife and American shad. The oldest fishing club in the nation, the Penobscot Salmon Club, started the tradition of sending the President of the United States the first caught salmon of the season.

My fondest and most treasured memories with the Ives were spent in the barn built near the farmhouse. Here, throughout the seasons of the year, musicians and storytellers would gather and share their music and stories together. There were no formal audiences, but they simply consisted of those who were entertaining one another. I first met Gordon Bok there. Fred Gosbee, a fellow UMO student started performing there, too.

We would start playing in the early evening and sometimes go until the earliest of morning hours. In the depths of December, January and February, the wood stove accompanied each artist with its own rhythms and sounds of sparks bursting and the heat of the fire would warm us to our collaborative tasks of performance.

Outside the Maine winter prowled around us. The barn boards creaked equally from the effects of its winds against them along with how its jaw dropping temperatures could make the wood vibrate as though it was a finely tuned instrument. Predatory, soothing, sharp in its deep bite of acrid cold, we felt privileged to be inside away from its immediacy. I could have sworn that those who reached moments of pure expression in their playing helped hold it at bay. Some seemed to tamed its fierceness with an equal kind of their own internal weather.

Sandy was the understated master of ceremonies. He encouraged each artist to share more deeply what each one was feeling. Looking back at those moments now, I think he encouraged us to understand more appreciatively the community we shared with one another. It was one with an ancient tradition of artistry traveling a number of timelines into the past, through the present and into the future of human experience.

Whenever I first performed with them, I felt that I did not belong there. I was in the presence of artists far beyond my levels of playing. Towards the end of the evening we would team up and play together. For a solo player like me, it was terrifying. Then liberating.

I learned an awful lot about myself. I see now the effect it had on my playing. It loosened me up. I got over myself. They shared something that had always seemed unreachable to me.

It was their ability to make themselves comfortable in the middle of the most daunting parts of playing. Joy in what you’re doing, and in the company of such people, made the difficult become not only approachable, but transformative. They were able to explore the levels of wealth and warmth within and between us that emerged from the reflections they were capable of rendering. They inspired me to reach beyond technique and into the heart and spirit of the songs being played instead. Then, too, we were able to touch, perhaps even achieve, how the love and pain of living could rip through us in the process of our own creativity. 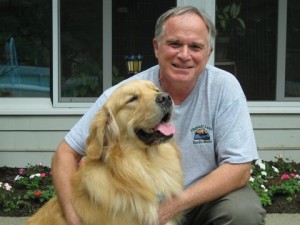 Sandy, if you are out there and listening still, like only you can do, thank you for the lessons you so generously shared with all of us.

P.S. Since that time until now, I have made sure that I had the presence of a golden retriever with me. Having one serves as a reminder of what you and Bobby taught me . . .

Dr. Ives Bibliographic Work during the Time Referenced in the above Post:

You are a creative, imaginative, and courageous adjunct prof. at Bridgewater State University. So often we have sat beside each other in Room 200, Moakley Center, and after I would ask how you were & what you were doing, I would sit back and marvel–truly–at the multiple, ingenuous tasks you were doing! Beyond challenging your students in inventive courses, such as Taking the Red Pill: The Matrix of Metaphor in Film and Literary Fantasy, you were writing a novel–The Penitent–and a BLOG! You are a gift–to BSU students, to faculty & staff, and NOW to 100s, perhaps 1000s before long. Congratulations! I am honored to know you and to be able to follow you–hoping to catch up!

Thank you for your kind words and for your taking the time to write them to me. Your support and friendship are invaluable to me. Please know that I always enjoyed our conversations together at Moakley Center. When I had questions about teaching and about the best way to help some of my students succeed in their classes with me, you always gave me insightful information and resources to use to help them do so. I am excited about the potential readership I hope I will attain. Please keep your fingers crossed for me and send a good word up above for an audience to blossom around this writing.

Yes indeed Barbara, my husband is quite amazing! He is a gifted writer and musician. We have performed as a musical duo for 27 years! Thank you posting your blog. I am sure you will love the his novel “The Penitent” It truly is amazing!