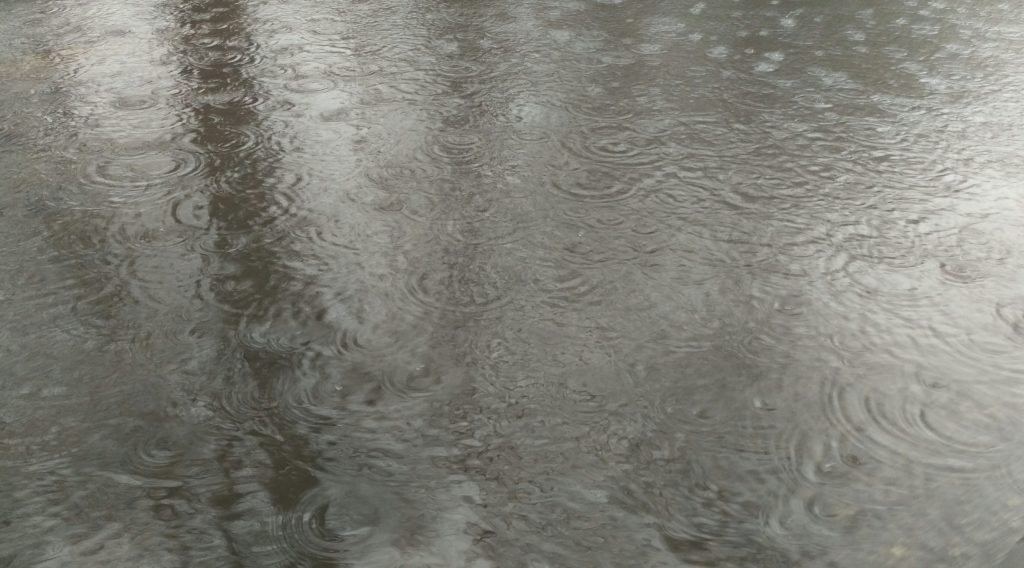 We are having a lot of rainy, gray weather in our area lately, as the leading photo to this blog post visually attests. It seems that we have gone from a very mild winter, especially in contrast to the one the year before, into a very wet and erratic spring weather system. In other words, we are having a typical southern New England spring.

Despite the fact that our April showers have fully extended so far into the first week of May, I’m still expecting the May flowers will bloom on time and just as beautifully as in past years.

The hope and expectation of the freshness and newness of better weather, especially following the darker, colder days of winter, will—despite my pun—spring eternal in our hearts. Most folks yearn for brighter days, warmer temperatures and the opportunity to shake off the habit of hibernation that lulls us into a long term dullness while winter besieges our energy levels.

This same sort of weather barrier that can blur and brutalize our sensibilities about the natural world, can occur within us as well. In this case, I am referring to a writer’s block I experienced every time I tried to write a fictional story. This block lasted until my 65th year.

I have mentioned it in passing in other previous blogs†. I tried writing at least a baker’s dozen number of stories. The idea of a story would hit me, I would be all excited to get the story down on paper and, often, start out with an explosion of free writing. Sometimes I would get through forty, even sixty pages. Sometimes, I would write twenty. On several occasions, several paragraphs.

I tried a wide variety of writing techniques, even psychological ones, to fix the impasse of my not knowing what to write next. No luck. Nothing in the well.  No matter what I did in terms of what are called prewriting strategies‡ (e.g., formal and informal outlining, brainstorming, clustering and branching, mind mapping and even more freewriting), I could not summon another shred of a word. A sentence would have been good, but I couldn’t even wring a prefix, suffix, syllable and/or morpheme out of me.

Ideas for plots occurring in Brazil, time travel, mystery, thrillers and stories of my own past experiences just dried up in the midst of their very genesis.

I had my music to fall back on, and I often wrote poetry. When I started teaching at the university and college level, I spent countless hours on research and scholarship activities.  For several years before that, I was a part–time newspaper writer. In all of these other forms of writing, I sometimes experienced blocks in being able to write, but such times were infrequent and were quickly overcome.

For some reason that I could not understand at the time, I just could not get my writing act together to write prose fiction.

Like the photo above, and my attempting at seeing more deeply and completely into the stories I was trying to bring into being, I could  only see an opaque reflection, at best, of something on the surface of the water, but it never came into sharper focus. The heavy amount of “rainfall” pouring on me mentally further disturbed the surface image by creating a complex set of interacting ripples whose outward number of concentric waves would make my high school physics teacher shout with joy.

No shouts of joy were demonstrated on my part. I began to dread the idea of writing in this fashion and gave it up. Yet, the itch to write a make–believe story kept returning to me.

The idea for The Immortality Wars arrived in pieces, or threads of thoughts that popped into my awareness based on questions I was asking myself and my students about the future. Once the existential questions were brought into play and percolating, I started recording the various responses I was receiving.

I also started reading a lot of books and research about what key experts were predicting about the future. I continued reading biographies of famous and not so famous officers in the United States military throughout our history, as well as those of other nations and empires throughout civilized and not so civilized world history.

As the stepping stones I was gathering were collected and stored in a place where I could see them and account for their similarities and differences, I began to see patterns and possible directions, but the clarity of the specific vision was not even emerging at this point in time.

Then, in the space of several days in May of 2014, a veritable waterfall of ideas cascaded down over me, and the story I was considering came into a sharper focus.

With great excitement, and Stephen King’s advice to write consistently on a daily basis in mind, I sat down on May 23rd and starting freewriting the Penitent.

When I saw during the process of writing itself what I was doing and how the progress of the story could only go so far, I knew that I had to break through past failures in not completing a story idea.

As I have taught some film classes in the past, and because I was writing in a style that I refer to as writing copy (i.e., getting the pace of the story moving such that a potential reader has to keep reading the story for the sake of finding out what happens next), I knew that I had to “block out” the very next sequence of scenes once the freewriting part of the story was at its perennial end.

I tried writing as though I was also the cinematographer of my own story, and as such, I needed to storyboard the plot in the same way a filmmaker would go about doing it in a similar fashion.

Instead of writing such future scene ideas on another document, I placed them just below the part where my narrative ended. 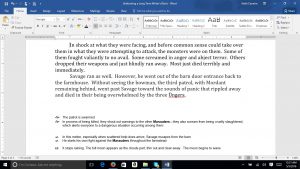 A screenshot showing two paragraphs of narrative that were written based off of the five bullet points shown directly below the last line of the narrative. (Credit: Keith Carreiro, May 2016.)

Using this rough methodology, or technique, I was able to smash through the perpetual writer’s block I always encountered before in writing a story.  The bullet points became more sophisticated; and, by using a series of coded bullet points, I could arrange them so that they showed me where the action was going immediately, a little bit later on in the scene itself, and even to the end of a chapter.

By blocking out the storyboard ideas, I was able to block out the writer’s block.

Yes, it sounds convoluted, but it worked!

To my amazement, and joy, the characters I created started to rebel against some of the storyboard ideas and told me that they were not going to follow such preordained fate for themselves. They chose their own destiny.

As I think about how I was able to get passed this block, I believe I found a way for my confidence to remain intact. In other words, before I had tried this strategy, I never had faith in myself, especially in this regard towards myself and in my own abilities;  I very much doubted I had the wherewithal to be a writer of fiction. Creating and implementing the storyboards enabled me to become awake with the vigor inherent in a spring time day. 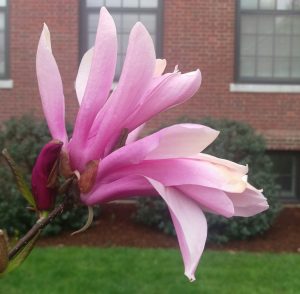 A Saucer magnolia (Magnolia × soulangeana) blossom on the Bridgewater State University campus. Harrington Hall is in the background. (Credit: Keith Carreiro, May 2016.)

I was able to sustain the edge of storytelling I first established. I set a goal of writing 144,000 words.  I surpassed that goal by writing a total of 168,000 words, instead. Not only did the story and my writing fiction fully blossom, but my confidence in myself as a creative artist flourished, too . . .

No surprise, you even have a creative way to unblock creativity. I continue to be amazed at what you are accomplishing … You are inspiring me.

Hi, Barbara: Thanks for your comment. It took me a bit to figure out how to approach this particular post. Unblocking a block seems awkward, at first; but it is like unlocking a lock (even rhymes!).